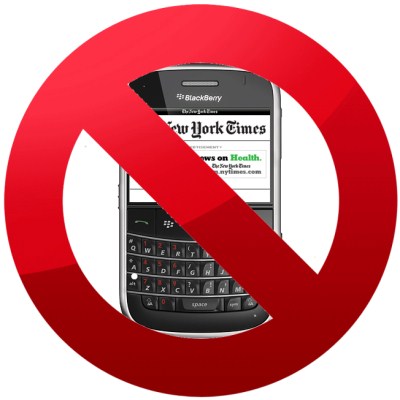 RIM has been experiencing what could clearly be described as its bad luck. Just a few weeks ago the company released negative results in its quarterly report and said its business is crumbling at a faster pace than ever. Besides, Blackberry 10, which has to release later this year, has also been delayed. However, RIM’s CEO had completely denied the rumors that the company is in a “death spiral”.

But the recent blow by New York Times has somehow added fuel to the fire. The publishing company has just announced that it would not support its existing BlackBerry app because of a colossal decrease in users.

Obviously, the top management of the company would be worried over the desertion of the world’s most prominent newspaper titles, hoping it doesn’t thump the confidence of other developers looking at the possibility of making apps for the BlackBerry platform.

Earlier this week, the newspaper discontinued support to the apps for BlackBerry and the DealBook BlackBerry Reader, asking users to read the news over their phones via the newspaper’s official site.

“Currently, our mobile Web site offers a more complete New York Times experience than the NYTimes app native to your device,” the NYT wrote in an announcement to its customers. “We’ve made the decision to consolidate our efforts and concentrate on delivering you the best possible experience through our mobile site.”

According to NYT spokesperson, the company offers its resources to products the users are really interested in, and that the BlackBerry app has been seen a major “drop off” in users.

But the company may consider the app from the upcoming BlackBerry 10, which will also have a new operating system. RIM is likely to launch BlackBerry 10 in 2013.

While responding to the current situation, RIM said it would “incorporate their feedback” as it is planning to release BlackBerry 10.