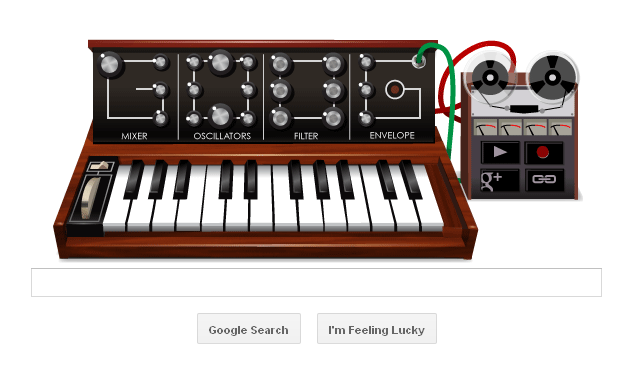 Did you like the captivating doodle in today’s Goggle home page? The one which produces some pleasing sound  by clicking on its keys using a cursor.  Google has created this interactive electronic synthesizer in order to celebrate the 78th birthday of music pioneer Robert Moog, 23rd of May, with a ‘Doodle’. The Google doodle in the form of an interactive electronic synthesizer represents the musical instrument Moog became famous for.

The doodle synthesizer could be played on Google home only if you’re logged in. Just place the cursor on its keys and each click will produce the music you’ll love.

Google has been using a number of doodles to drive attention to a particular event or cause in the recent past. Moog’s synthesizers captivated the audience during the 1960s and transformed the music scene in that era. He worked with composer Herbert Deutsch during development.Moog had been interested in electronics from a young age and by 1954 was selling Theremins by mail order. He had an electrical engineering degree from Columbia University later on which further enhanced Moog’s experiments and innovation, not to mention know how of electronic equipment.The first Moog synthesizer came on the scene much later, in 1964. Robert had not initially planned on marketing or selling the equipment, but it became such a hit that he decided to make it a business.”I didn’t know what the hell I was doing. I was doing this thing to have a good time, then all of a sudden someone’s saying to me, ‘I’ll take one of those and two of that.’ That’s how I got into business.” Moog later disclosed.Robert Moog died of brain tumour back in 2005, at the ripe age of 71. He would have been 78 years old today had he lived on. His legacy though remains in the music industry. Legendary music bands such as the Beatles and the Doors used the Moog Synthesizer as it became a sensation around the music worlds. Later on many bands would turn to the Minimoog, a more compact version.Even today; bands such as Fat Boy Slim continue to use Moog’s equipments.

The doodle will stay on Google home till the day end May 23rd and in order to archive this doodle later sometime, find it on 2012 Google Doodle Archives.


Posted by Kathryn Jan in Websites