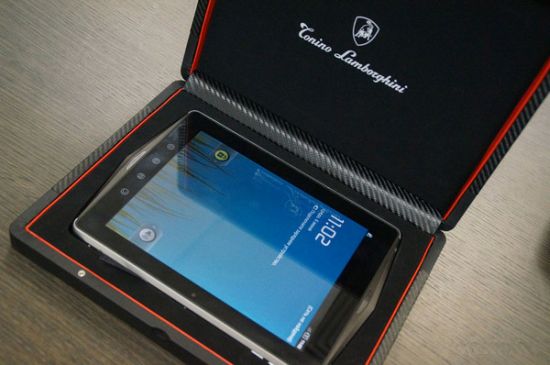 Tonino Lamborghini, the son of a renowned Italian industrialist Ferruccio Elio Arturo Lamborghini, has introduced the latest range of luxury phones and a tablet for Russian consumers.

The slim and sleek TL688 Spyder comes with a two inch QVGA display with 240 x 230 pixels resolution, 3 megapixel camera located on both sides of the phone that captures high quality image, and video recording facility. It has a 4GB storage capacity (which is expandable) and second generation network support of GPRS/EDGE connectivity. The phone comes with stunning leather back and a gold plated case. Being a luxury phone, it costs around 60,000-70,000 Russian ruble, which is approximately $1829 – $2134.

TL820 Spyder 2, the second novelty, contains a 2.4 inch VGA resolution display and has almost the same design that is followed in TL688 whilst getting the same gold and leather treatment. It is equipped with a 5 megapixel camera on its back side and a VGA shooter in front. It also includes 1GB internal memory which can be extended up to 16GB. The phone comes with a 2.5 mm audio jack and 1200 mAh battery. This phone costs around $2438.

Priced at $2750, TL700 is actually an Android Smartphone and works on Android 2.3 Gingerbread. It is equipped with an unknown Qualcomm processor and has a Sapphire Crystal 3.7 inch resolution display. A 5 megapixel camera is located on its back side and VGA shooter at the front. It is manufactured using crocodile skin and has a 1400 mAh battery.

Another innovative device is L2800, an android tablet, which has a 2 megapixel front facing camera and 5 megapixel camera located on its back side. However, it is not gold plated but it does support the Lamborghini name on it and costs around $2268.

All these luxurious products are expected to release sometime in late August and hopefully make their name like Lamborghini’s other products such as cigar lighters and cutters, and Spyder Supreme Diamond cell phones.