Home » Education » General Knowledge » Difference between a Moose and an Elk 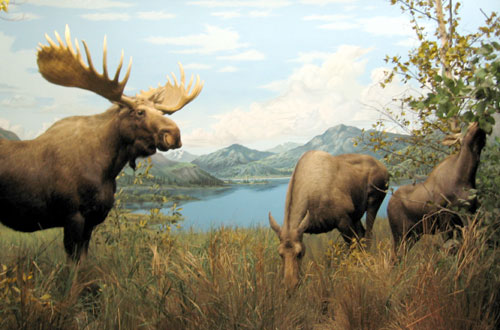 The first main issue is the fact that the names of these animals are fairly similar. In Europe, the animal that the Americans call the moose is known as an elk. While on the other hand, the animal that is referred to as an elk in America, is known as a wapiti in Europe. However, despite the difference in the names, they all belong to the deer family. The deer family consists of a number of different animals and the elk and the moose both belong to it.

The moose holds the honours of being the largest deer, and it can be easily distinguished from the rest, simply because of its large size, the massive antlers that it has and its nose. The elk is a little smaller and doesn’t have the same nose as a moose. In fact, they have a shaggy sack around their neck. However, even though elk are smaller compared to moose, they are still bigger, when compared to other deer.

So basically, the main difference between the moose and the elk is the fact that the moose are the biggest deer out there, they have massive antlers and a very distinguishable nose. On the other hand, the elk are slightly smaller in size, but they don’t have the same nose as a moose, instead they have a little shaggy area around their necks.