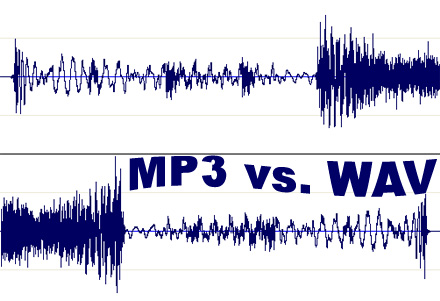 WAV, an audio file format developed by Microsoft, is basically a shortened version of WAVE, and the format uses PCM encoding method, a method that is used by digital audio CDs. WAV files usually contain uncompressed audio data, which in turn, take too much drive space. WAV files are also capable of storing compressed audio data, however, it is rarely used method.

On the other hand, MP3, an audio file format developed by Thompson Multimedia and Fraunhofer-Gesellschaft in the late 80’s, is a lossy format that uses a compression method which discards the parts of the music which people usually are not likely to listen to. MP3 files are widely used format by people around the world, because its ability to save plenty of disk space.

As WAV is a losseless file format, the quality of the music will remain the same even after compress and decompress the audio using any losseless format. On the other hand, you will start losing the quality of an MP3 file, if you compress and decompress the music multiple times because of its lossy format. Every time the file will get compressed using the MP3 format, some portion of the music will get discarded.

When it comes to editing audio, most people prefer WAV over MP3, as data saved in WAV files is uncompressed, and computer does not need to decompress and compress the data multiple times during the editing process.