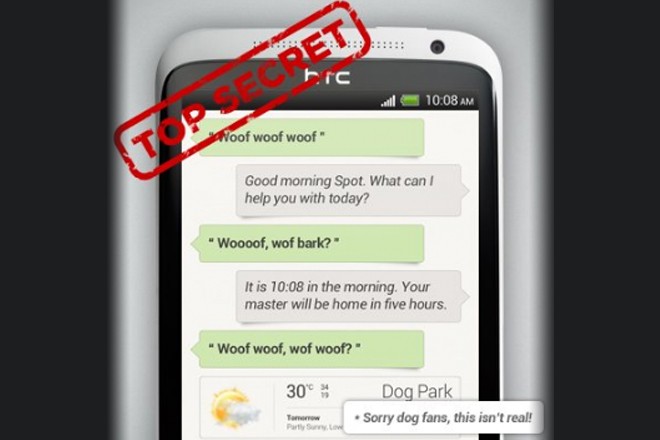 Apple was the first one to introduce the Siri software, which plays its role as the personal and knowledge navigator. Due to its fame and admiration among users, the app was later on introduced in several other gadgets, like Samsung launched the similar app with the name S-Voice, where as LG showcased it as a Quick Voice App. Recently HTC Smartphone has revealed that the company will be launching Siri app in their phones as well.

The image which this Taiwanese company has posted on the internet is though confusing people, still it seem the company will be introducing something new and innovative by making this app more fun oriented.

If we notice the image it shows a conversation between a dog and Siri; the dog is deliberately barking whereas Siri is replying to the dog, in a proper manner.  At the end of the conversation a message is displayed, saying “Sorry dog fans, this isn’t real!” which although proofs that this app is not at all designed for a dog. But the company is surely planning to introduce something unique in the market.

The image of Siri and dog Spot’s conversation is posted everywhere, on Facebook as well as on Twitter.

There is another unusual message on the image saying ‘Top Secret’ which shows that HTC is planning some sort of intrigue.

By observing the conversation it is clearly noticed that HTC’s own app is being teased, well no one knows yet what the company is setting up to showcase, though HTC users are anxiously waiting for the company to reveal more news about the unique app.

Along with appreciation and curious comment the app is also receiving criticism for copying the app, but no one knows, the company might launch something very unique and incomparable that might change every one’s point of view.