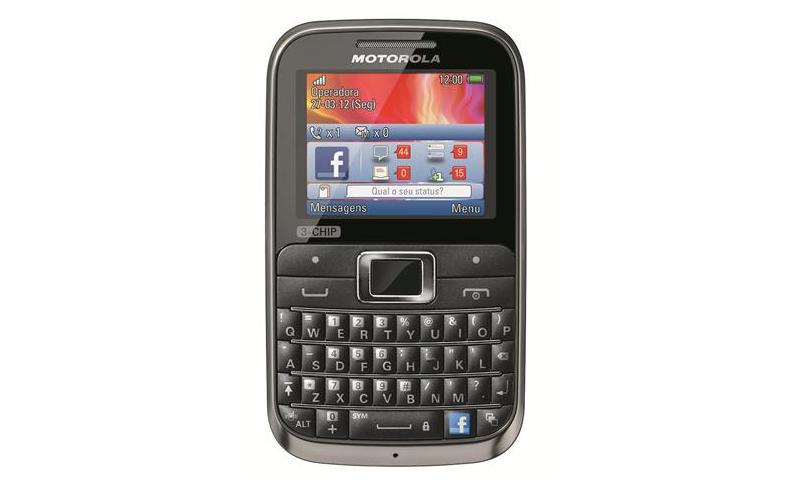 Motorola has recently introduced a triple SIM handset in Brazil which brings many other exciting features along with ability to handle three SIMs at the same time. The phone will be available for grab possibly in next week and it costs R$ 349, i.e. around $170. The MOTOKEY ™ 3-CHIP would be a great option for those who are always looking for best rates and so have subscribed to more than one carrier. In Brazil, mostly pre paid plans are in demand and the carriers normally offer on-net packages, i.e. you can have free minutes and lower rates for calling on the same carrier. So, if one has friends on one network, professional contacts on other and family on another, the phone would certainly do great!

The cell phone has many other features to entertain you including a cool design (though it seems bit bulky to some, but still it’s smart). The QWERTY keyboard that allows smooth typing, default availability of social networks, a 2 MP camera and option to directly share the pictures and videos on social sites, MP3 player, FM radio, microSD card slot expandable up to 32GB and 2GB included!

Although it’s a features rich phone, working of some of the applications and features may depend on the operators’ terms and conditions and it’s also possible that they are not available in all the regions. So, in case if you’re planning to buy, do check with your network prior to buying the phone.

The triple SIM phone may attract a good number of people in Brazil, but one thing is to be cleared that Motorola is not the pioneer of triple SIM phones. Earlier this year in January, LG introduced a triple SIM A290 phone. But, yes, the LG A290 is not as feature rich as of MOTOKEY 3 CHIP.