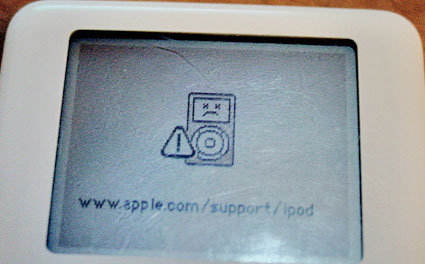 If the reader happens to have one of the newer iPod models, such as those that no longer make use of the scroll/click wheel then this problem does not affect you. However, if you happen to own one of the earlier models of the iPod then your sir or ma’am have a hipster level of over nine thousand!

Apple released the iPod as a simple mp3 player in what seems a lifetime ago. Since then the product has spawned a series of products such as the iPod nano, iPod shuffle, iPod touch, the iPad and of course, the iPhone. However, if one does have the iPod of the olden days then there are a number of issues that could rear their ugly head with continued use.

To be fair though, the fact that the piece of technology is still working is a testament to the vision of Steve Jobs and Apple, before the company decided to make tons of money by releasing what was pretty much the same thing every six months. You know what we’re talking about; the iPhone 4 followed by the iPhone 4S.

It seems that anything with an ‘i’ preceding it and an Apple logo is bound to sell extremely well and the reason behind it is the original iPod as it set Apple on the path to global domination.

One of the issues with the original iPod and a few models after it, before the touch screen was introduced, was the Sad Face icon. This basically indicated a problem with the Hard Disk and meant that the device could not access its memory. The fix is quite simple.

– the iPod
– the iPod’s cable
– electrical outlet
– computer or laptop


Posted by anthony-smith in Electronics & Gadgets