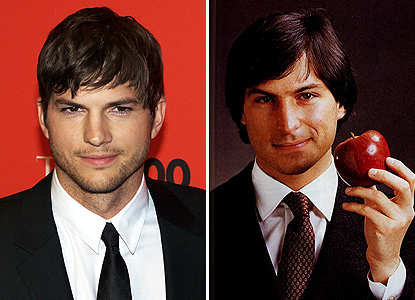 With a trimmed beard and shaggy hair, he looked like a young Steve Jobs when he came to the sets of “Jobs” yesterday.

Walter Isacson’s biography shows the history of Steve Jobs as a carefree person who avoids taking showers or even wearing slippers. Ashton Kutcher is playing Steve in the film. The story follows Steve’s rise to success after being expelled from college on to developing the Apple brand.

According to the producer Mark Hulme, the movie will be based on Steve’s real childhood life from 1971 to 2000. Josh Gad is playing the role of Steve Wozniak in the film.

The producer said Kutcher was chosen for this film because of his looks which are just like the late Steve Jobs during his younger years. “When Ashton read the script he was immediately attracted to the project,” Hulme said. “He is a Steve Jobs and Apple fan, and is technologically savvy as well, so he recognized the historical importance of Steve Jobs and the potential of the project.”

According to reports, on the first day of shooting, several scenes were filmed in the actual garage where Jobs initially started gathering Apple computers. Initially, this garage was the official head office of Apple and was the property of Jobs family, but later on Steve Jobs moved to a rented office located in Cupertino, Calif. This is the place where he developed the first Apple computer as well as the Apple II, which actually hit the market.

The producer Mark Hulme has a lot of confidence in Ashton and believes Ashton will successfully perform the role of Steve Jobs.

“Since our film covers the early years of Apple, when Jobs was in his 20’s, we needed an actor who could carry not only the youthfulness of Jobs at the time, but also the psychological complexity,” said Hulme, “Because of that, and Ashton’s physical similarities to Jobs, he’s perfect for our film.”


Posted by chris_ellsbury in Arts & Entertainment