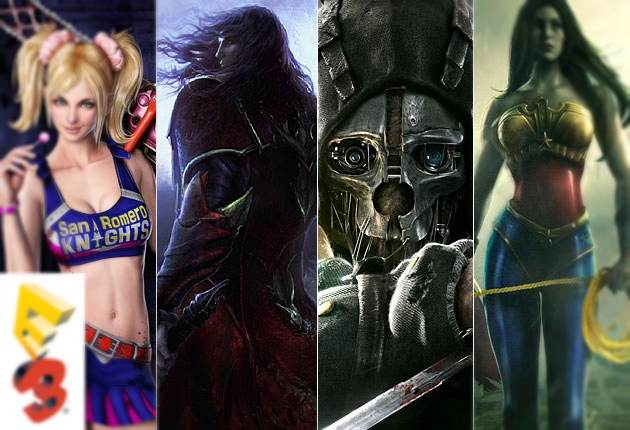 The E3 conference always increases excitement among gamers for upcoming releases. Titles that are expected this year are a mix of some well respected franchises and some great looking new entrants. However, every year some video games rise to the top of the pile because fans can’t wait to get their hands on them. The hype generated from these titles comes from many factors but in most cases, gamers are expecting developers to outdo their previous versions. In some scenarios fans are excited about a new story line or game format that has never been seen before. Below is a list of games that have the crowds frenzied in anticipation of release after the E3 2012:

This is an interesting mash up game that takes RPG characters from previous games and puts them in a 2D fighting environment. The studio behind the game, Arc System Works, is betting on the fact that it has included a lot of great fighting game features to please the fans and hopefully overcome the trepidation that fans of the older format might feel.

This PC only title gives mech fans a chance to control their own machine as they battle other mechs. There are three types of machines and the user can upgrade the mech through in game app purchase. Adhesive Games has used a free-to-all model for the game and has utilized the Unreal Engine to power the carnage.

Not many Star Trek fans expected to see a video game of their favorite TV show and movies but here we are. The new video game is to be released on the PC, PS3, Xbox 360 and is based on the latest Star Trek movie that was released in 2009. The game is expected to come out right before the sequel to the block buster movie hits theaters.

The DoA games are some of the best for Sony Playstation and the latest version is expected for the PS3 and Xbox 360 soon. Tecmo Koei has changed things up this time and gotten rid of the franchise creator and converted the game to a multi-platform format. There is also an interesting new feature called Power Blow that can be used to hit and move an adversary towards a particular direction. The game play looks smooth and fans are expecting a hit to add to their collection.

Call of Duty just never seems to get old and gamers have eaten up the previous releases. Gamers can expect to see the latest variant for PC, PS3 and Xbox 360 right before Christmas. Black Ops II has pretty much all the factors needed for a hit, including a story that has been created by David S. Goyer, the writer of the popular The Dark Knight. First person shooter involves a small band of soldiers going up against an organization that has taken over the United States unmanned battle machines. The interesting twist is that the game play takes place in two time frames; 2025 and early 80s.

The Last Guardian for PS3 has been getting a lot of attention since it was announced at E3 2009. Fans have high expectations from the game after Team Ico, the creators of the game, produced hits like Ico and Shadow of the Colossus. The game play should be very similar to the previous titles with the addition of a giant Trico companion that helps the main character throughout the story.

This spin off from Metal Gear Solid will be available for PC, PS3 and Xbox 360. Focusing on the main character from the second Metal Gear Solid title, the game promises a lot of action and adventure. The new game is expected to move away from the sneaking around and stealth tactics and go towards more head-on fighting.

Master Chief is back in Microsoft’s latest Halo game developed by 343 Industries as part of the The Reclaimer Trilogy. Halo 4 is scheduled to be in stores by November and in time for Christmas. The game should boast of some great graphics, new weapons, new vehicles and good old fashioned shoot-em ups.

Playstation hit a gold mine with the God of War games and PS3 will see from the latest version some great new features. Gamers should expect to see a new fighting dynamic, graphics and a multi player mode as the story line tells the tale of how Kratos became the Ghost of Sparta.

Gamers have not seen Lara Croft for a while and the latest reboot promises to be a hit if it delivers all the great actions of previous games. The new story line is another original story, with fans seeing how Croft became such an action star. The player will follow Croft as she gets marooned on a mysterious island and goes through a transformation.