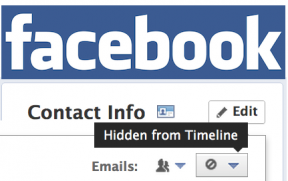 In order to improve email address privacy, Facebook decided to hide user’s third-party email addresses from their profiles, and user’s Facebook.com address is the only one that can be seen to anyone.

Previously, Facebook users have the option to choose which of their email addresses are displayed on their profiles and change the privacy settings accordingly, but now with the new settings, users cannot share their personal email address with friends or the public.

To manage the privacy setting of each email address, Facebook has connected to user account, and users now have another setting to control whether to “show” or “hide” that account on Timeline. This eventually makes unclear for users to understand which email addresses they are sharing. While looking at the example below, the privacy setting for the Hotmail account is “friends,” as it has been for very longtime. The Facebook.com address is set to “only me,” as shown by the lock icon. But since Facebook has introduced new setting to the right, it defaulted all non-Facebook.com accounts to disappear from Timeline, and left with Facebook.com accounts visible on Timeline.

Back in April, Facebook came up with an unclear announcement about “updating addresses on Facebook to make them consistent across our site.” However, it did not say that it would hide users’ non-Facebook.com email accounts. It just said, “Now, the address people use to get to your Timeline and send you email on Facebook will be the same.”

The social networking site said in a press release:

“As we announced back in April, we’ve been updating addresses on Facebook to make them consistent across our site. In addition to everyone receiving an address, we’re also rolling out a new setting that gives people the choice to decide which addresses they want to show on their Timelines. Ever since the launch of Timeline, people have had the ability to control what posts they want to show or hide on their own Timelines, and today we’re extending that to other information they post, starting with the Facebook address.”

It seems like Facebook’s recent change to hide email accounts is a tactic to promote its own messaging feature over third-party email services. However, the social networking giant is yet to comment on this issue.