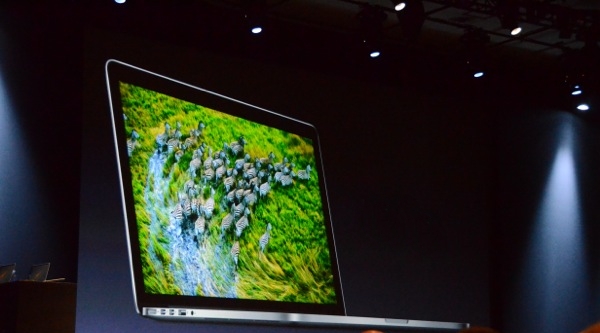 Apple’s Worldwide Developers Conference (WWDC) had a lot to offer consumers this week as it showcased a number of upgraded products including the latest version of the MacBook Pro. Apple unveiled its super-thin laptop on stage and called it the “most beautiful computer” ever created by the California based company.

A captivated audience watched as the .71 inches thin MacBook Pro was showcased. Weighing at just 4.46 pounds, the gorgeously designed machine has the much talked about 15.4 inches retina display which has 220 pixels per inch. The crisp display is helped along by Nvidia’s new Kepler graphics chip. The MacBook Pro is not light in other processing departments and comes with a quad-core i5 or i7 Intel processor, 8 gigabytes of 1600 MHz memory and up to 512 gigabytes of solid-state storage. The laptop has been made quieter with a new fan configuration, while the other connectivity goodies include USB 3.0, HDMI port along with two Thunderbolt ports. A MagSafe power supply will feed the massive battery in the laptop which is stated to have a seven hour life. Many observers have noted that the upgrade machine looks similar to the MacBook Air.

The $2199 device is expected to start shipping next week and many observers see this as Apple’s attempt to shake up the ultra book market. The upcoming months will see a number of releases from manufacturers in the ultra book sector powered by Microsoft and Google software.

The announcements at the WWDC did not stop at the hardware. The new iOS6 was also unveiled with hundreds of new features. It was also revealed that Google Maps was being dropped in favor of Apples new 3D mapping service. The company used the WWDC to drum up interest in its software so that developers keep using Apples app store as their first choice for release of new software.