Home » Places » The Man-Made Island Is On Sale, for 5.2 Million Euros 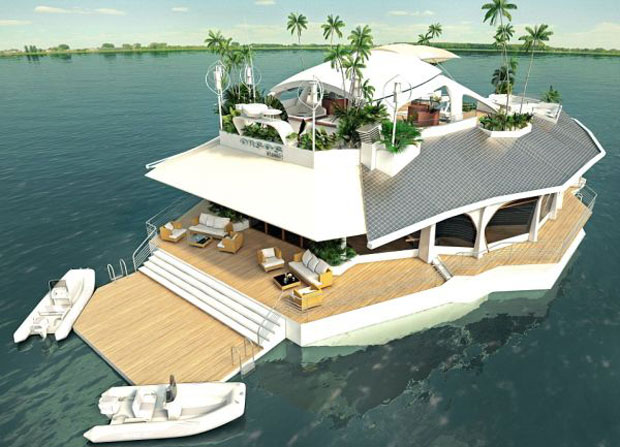 For mega rich people who are looking for bizarre outlets to spend their money on, an Austrian firm has now provided them a chance to place pre-orders for a $6.5 million floating island, the cost of which in Euros is a whooping 5.2 million.

This man made floating island, which has an astonishing price tag, is 20 by 37 meters in measurements. Though there is no engine attached to the island, but you can still easily anchor it into any direction depending on choice.

According to the firm who managed to build this domineeringly exotic island, many people are anxiously waiting to place their pre-orders ever since the news of this place was leaked into the market.

Orsos Island is named after Hungarian born entrepreneur, Gabor Orsos, who is the current owner of the island.

After putting his island on sale he said that “The interest has been massive from all over the world, from Australia, China, the United States. We have already had the first pre-orders and we have some potential buyers coming from Australia next week,”

Every possible facility which a person can need is present on Orsos Island, including solar panels and a wind generator to provide energy.

This undoubtedly makes the island environment-friendly and self-sufficient. So now 12 people can easily lodge in the 1,000 square meters of living space that this island provides.

According to Gabor Orsos, the first project will take approximately 18 months or 2 years to be completed.  After completion, the island will be transferred from Danube River to Black Sea and from there, the owners can take it anywhere they want to.

Though many people are in awe of the idea, but a few are dealing with confusing questions like; Whether the island is sufficient enough to withstand storms? Is it really self-reliant? Isn’t the cost way too much?

In the absence of any laws related to anchoring islands on international territories, it will be interesting to see how the world reacts to Orsos Island.


Posted by aimee hudson in Places