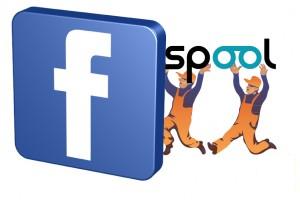 The social bookmarking company has been acquired by Facebook, the Spool team wrote about this acquisition on the company’s official blog. Spool is considered to be a small firm that works on mobile content consumption. And, this is the field where Facebook really need to improve in.

The service has already been closed down and was still in the beta process. According to reliable sources, an email has been sent to all the users along with their bookmarks in a file known as “bookmarks.html.”

Spool is a five member company and after this acquisition all of them will start working under the umbrella of Facebook. Additional details of this buyout are yet to be revealed, but this seems to be mainly a talent buyout. It is also heard that the social networking giant is neither interested in technology that was used in Spool nor its user data.

The Spool team said in a blog post that they are proud to pursue their vision with Facebook, so that they can efficiently and effectively deliver more sophisticated technology and deep expertise in mobile software development.

“The Spool team has deep expertise in mobile software development and a passion for making content easy to consume,” a Facebook representative said in a statement. “We’re excited for the team to join and accelerate their vision at Facebook.”

Well, it seems like Facebook will not include the Spool name to any of the services the team will now be working on. However, further details will allow us to give in depth analysis on this whole situation.