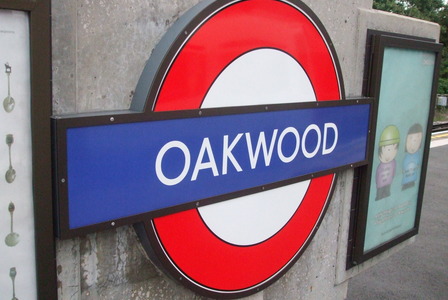 Oakwood tube station was initiated in March 1933 in North London between Cockfosters and Southgate tube stations on Piccadilly Line. Its location is on Bramley Road in Oakwood area of London. The building is a good example of the British architecture of Charles Holden who designed a number of extension projects for different stations on Piccadilly Line in London. During the period of October 2006 to December 2007, this tube station was included in an upgrading project launched by London Underground network to upgrade many tube stations in London. This up-gradation plan has provided it with lifts, toilets, ticket halls, bridge and waiting rooms. Its entrance and exit points are from Bramley Road that people can easily access through. Places to explore near Oakwood Tube Station.