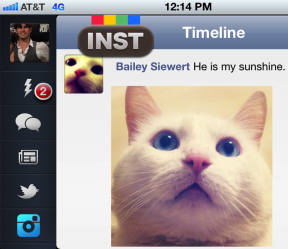 The popular MyPad app has just unveiled updates that allow its users to browse through their Instagram feeds and also interact with photos whilst reading and posting to Twitter and Facebook.

Now with the help of this app, you can browse Popular and your own network’s Instagram feed. In addition, you can edit photos, add filters, batch upload, listen to free music from Hype Machine and much more. Besides, you can have the access of your Twitter Direct Messages, by which you can follow the recent updates on the micro blogging network.

All the 10 million registered users of MyPad are for sure digging the update, as sharing has increased up to 10x in the previous days.

Basically, MyPad comes as a substitute for a native Facebook iPad app. This update for MyPad’s iPhone app comes after the period of eight months, and also includes support for the New iPad’s Retina display. Furthermore, the update also brings Airplay monitoring so that you watch all the photos from your social network streams on your TV along with special Ken Burn slideshows. There is also a section included in MyPad which let users to download other applications.

The application is fully occupied with many features, which made it a bit crowded. However, it provides you the facility to use Facebook, Twitter and Instagram at one place, which eventually made this app extremely useful.Though, signing up for all the three social networks at one place, which is in fact safe, but seem little intimidating.

Presently, this app is only available for iOS devices. However, by paying just $0.99, you get its paid version, which is used for the iPhone. In addition, by paying the same amount you can get the iPad version of it. All the three versions of the application are obtainable from the iOS Store.