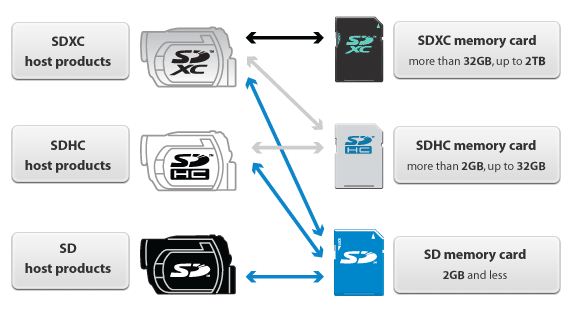 Almost all mobile phones, tablets and other devices use SD cards as a means of data storage. After the release of SD standard, SDHC and SDXC standard were launched as well. Even though the use of both SDHC and SDXC standards are the same, there are some differences between the two. SDHC cards have not exceeded the 32GB storage limit whereas theoretical storage limit in SDXC cards is around 2TB.

Speed is another difference between SDHC and SDXC. For fastest SDHC cards, speeds can reach a maximum of 12.5MBps. Of course there are minimum speeds as well. On the other hand, SDXC cards are much faster, with maximum speeds reaching 104MBps, more than 800% higher than SDHC cards. Devices such as HD video cameras and digital cameras with high resolution make use of SDXC cards.