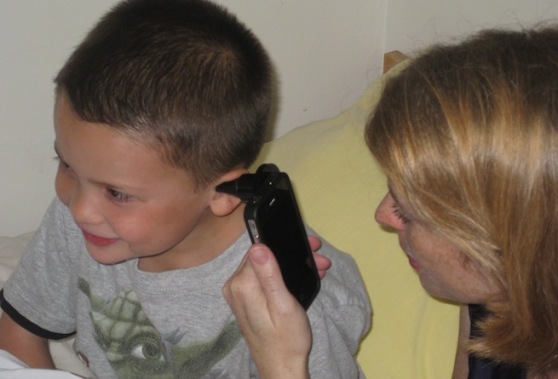 Most parents have experienced the anguish of a crying baby with an ear problem. It is estimated that over 25 million people in the U.S. used to visit medical specials because of an ear infection. But now they can thank the mobile microscope company CellScope for making a device that can make such visits unnecessary.

The company has developed an otoscope that connects to an iPhone so anyone can capture the image of the inside of an ear and send it to a doctor for diagnosis. After writing down some important notes related to that infection, parents can themselves ask their doctor to give an analysis on it.

The company also $1 million from Khosla Ventures to work on this project.

CellScope’s technology was started at the University of California, Berkeley, where a team developed a mobile microscope under the supervision of bioengineering professor Daniel Fletcher. This microscope was used to identify tuberculosis in developing countries and it was found to be extremely useful for people living in these countries.

Douglas, who was a part of this project, said that the company is currently pilot-testing its instrument with some reputed doctors while conducting a scientific study to make the images better as compared to other diagnosis methods.

In addition, CellScope wants to make this product in a way that it can be used for other purposes as well. The company is also thinking to make a “digital first aid” kit. Another upcoming product is a dermascope, which will generate diagnostic-quality images of skin diseases. According to the company, skin ailment is another disease after ear infections which lead many people to the medical specialists.

The company says that this instrument can eventually save more than 25 million pediatric doctor appointments every year that result from ear disease.