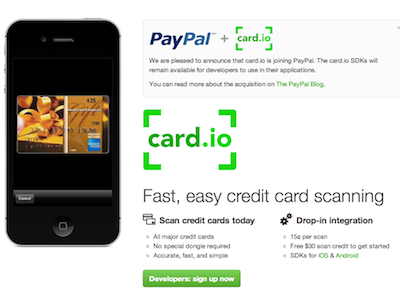 PayPal – the company which deals in electronic payments worldwide – has acquired Card.io that offers a way for smartphone users to capture credit card data with the help of its camera.

Terms and conditions of the deal are yet to be revealed.

The acquisition clearly reflects that the company wants to bolster its present image against mobile upstart Square, which recently made it public that it was processing four million dollar a year in payments. Square is also planning for expansion at international level. The company also provides an accessory that can be integrated with mobile phones and allows users to swipe their cards in order to make payments.

Square has become a great rival for PayPal. The company was developed by Twitter co-founder Jack Dorsey.

The system is recently launched and consists of a triangle-shaped “dongle” card reader that connects with mobile phones and enables users to make purchases.

The software is very helpful for shopkeepers as well as it takes payments by taking an image of a card with a mobile phone instead of swiping it in the dongle.

PayPal said it decided to acquire Card.io because it found the company’s team extremely talented and competent.

Hill Ferguson, PayPal’s VP of global product, said in a company blog post, “While working with them, we were simply blown away by the creativity and drive of their employees,” he said. “They are a passionate and independent team that likes solving large, complex problems and we wanted them to join our team.”

According to Ferguson, the team at Card.io will soon join PayPal’s digital wallet. On the other hand, the technology that is used in Card.io will remain accessible for developer use in apps.